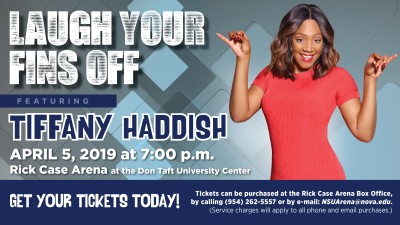 Tiffany Haddish, one of the most sought-after comedic actresses and performers is coming to NSU on April 5, 2019 at the Rick Case Arena. Tickets are on sale now and can be purchased at the Rick Case Arena Box Office located in the Don Taft University Center. View the ticket prices and policy here.

If you are not at the Fort Lauderdale/Davie Campus and are worried about getting tickets, you can purchase tickets by calling (954) 262-5557, or by email: NSUArena@nova.edu (service charges will apply to all phone and email purchases).

Haddish is perhaps best known for her breakout role in the smash comedy Girls Trip, where she appeared as the scene-stealing “Dina” alongside Jada Pinkett Smith, Queen Latifah, and Regina Hall. Her additional film and television work include Uncle Drew, The Carmichael Show, Keanu, Meet the Spartans, Racing for Time, The Janky Promoters, If Loving You Is Wrong, Real Husbands of Hollywood, and New Girl. Haddish was also an early stand out during her appearances on Def Comedy Jam, Who’s Got Jokes, and Reality Bites.

In addition to her acting work, Haddish continues to tour the country and perform to sold-out crowds on her “She Ready” comedy tour. Her debut stand-up special, Tiffany Haddish: She Ready! From the Hood to Hollywood, was released on Showtime in August 2017. In November 2017, she made history by becoming the first black female stand-up comedian to host Saturday Night Live, a role that earned her an Emmy nomination for Outstanding Guest Actress in a Comedy Series. Her first book, a memoir called The Last Black Unicorn, was released the following month and made the New York Times Best Sellers List.